“Road to Formula E”: Infographic series on the works entry in the all-electric race series

Stuttgart. With the Porsche 99X Electric car launch for Season 6 of the ABB FIA Formula E Championship, Porsche broke new ground: The sports car manufacturer opted for a live video game and got the online Twitch community involved. They unveiled the Porsche Formula E racing car on twitch.tv/Porsche on 28 August 2019 as part of “Formula E Unlocked”. A total of 14 million contacts were generated on Twitch during the car reveal campaign. Almost one million viewers were involved virtually and live, as Porsche regular drivers Neel Jani and André Lotterer – after four hours of game time and guided by the gaming community – found and unveiled the 99X Electric at Porsche Digital in Ludwigsburg. The highlight clip of the “Formula E Unlocked” video game can be viewed at newstv.porsche.com.

Oliver Hoffmann (Director Marketing Communications at Porsche AG): “It was an exciting and varied car launch for the Porsche 99X Electric. In motorsport, we are used to the traditional car launch, where as a viewer you follow the events on the screen. In Formula E we are addressing the young, digitally-oriented target group, which is why we consciously decided to break new ground. With the “Formula E Unlocked” video game, we not only established communication with this target group, we got them actively involved in unveiling the Porsche 99X Electric. It is fantastic that we were successful with this innovative type of car launch and that it was also appreciated by different target groups.”

Adam Harris (Director Custom Solutions, Twitch EMEA): “By bringing to life Porsche’s launch of their first Formula E car with a never before seen experience, we wanted to tap into the magic of what our community create every day around the world. Through the results we have seen, we can say we certainly did that. We are delighted with the results we have achieved with Porsche which saw huge numbers of our community interact and endorse the brand in a meaningful and impactful way.” 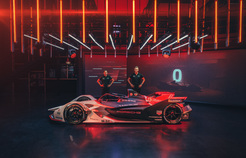