Stuttgart. Larry ten Voorde (Nebulus Racing by Huber) is the new champion of the Porsche Carrera Cup Deutschland. At the Motorsport Arena Oschersleben, the Dutchman won the eleventh and final round of the season and beat Dylan Pereira (Förch Racing) in the gripping duel for the title. “That was a long road to the title, which makes me all the more pleased with this success! I got off the line really well, and the last metres to the flag were of course particularly emotional,” said an elated ten Voorde. Pereira clinched second place in Sunday’s race ahead of Leon Köhler (Germany/T3/HRT Motorsport). Two other title decisions were made at the last race of the season: Laurin Heinrich (Germany/T3/HRT Motorsport) secured the rookie crown after his maiden Carrera Cup year, and Förch Racing celebrated first place in the team championship.

Heading to the final round, only four points separated the point’s leader ten Voorde and his hottest pursuer Pereira in the championship. Taking up the race from second on the grid in his 485-hp Porsche 911 GT3 Cup, ten Voorde got a better start than polesitter Pereira. In the second corner, the Huber driver overtook the 23-year-old – the crucial scene in the race and in the fight for the title. Ten Voorde convincingly defended his lead, maintained his composure in the safety car phase, and was the first over the line after 21 laps. The 24-year-old is just the fifth driver to win both the Porsche Carrera Cup Deutschland and the international Porsche Mobil 1 Supercup in the same year. The others to manage this feat were Frank Stippler (2003), René Rast (2012), Philipp Eng (2015) and Sven Müller (2016) – for all of them, this was the launching platform into professional motor racing.

Pereira’s second place put him out of contention for the title. “All in all, I can look back on a strong season. My starting position was good heading into the finale but I made minor mistakes after the start and unfortunately, that cost me the win and also the championship. It was a close fight that was ultimately decided by details,” said Pereira. Thanks to his sixth podium result, Köhler finished third in the overall rankings. “My weekend went well with two third places and, all in all, it was a successful season,” said Köhler. His teammate Laurin Heinrich crossed the finish line on the 3.667-kilometre racetrack near Magdeburg in fourth place.

The 19-year-old rookie from the Porsche Carrera Cup Deutschland Talent Pool was followed over the finish line by Julian Hanses (Germany/Förch Racing), Lukas Ertl (Germany/Overdrive Racing by Huber) and the Australian Joey Mawson (Fach Auto Tech). Diego Bertonelli (Italy/Fach Auto Tech) rounded off the top eight. In the ProAm class, Carlos Rivas (Black Falcon Team Textar) celebrated a successful conclusion to the season: As the ProAm champion, the Luxembourger won his class ahead of Matthias Jeserich (Germany/CarTech Motorsport by Nigrin) and his compatriot Stefan Rehkopf (Nebulus Racing by Huber).

“That was a truly spectacular final weekend. I’m proud that the teams and drivers put in a huge effort to give us a great season, despite the challenging conditions,” said Hurui Issak, Project Manager of the Porsche Carrera Cup Deutschland. Following the season finale, the national one-make cup will hold its Experience Day on Monday (9 November). Eleven young up-and-coming drivers get the chance to meet the teams and the organisers of the Carrera Cup and to drive the Porsche 911 GT3 Cup on the racetrack. 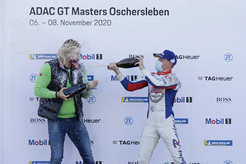 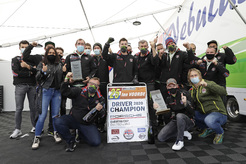 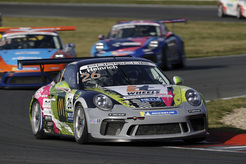 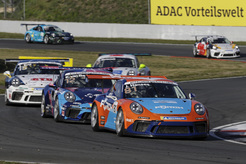 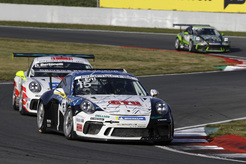