Stuttgart. The Big Apple shines a spotlight on electromobility and sustainability: Before the TAG Heuer Porsche Formula E Team makes its debut in New York City, two fully electric Porsche cars – a 99X Electric racer and a Taycan 4S – turned heads at a spectacular photoshoot in the world-famous Times Square. This weekend, rounds 10 and 11 of this season’s ABB FIA Formula E World Championship will be contested in the streets of Brooklyn.

As the world’s first electric racing series, Formula E has brought gripping motor racing to fascinating metropolises such as New York City. From Porsche’s perspective, it is the most competitive arena in which to advance the development of high-performance vehicles with a focus on environmental friendliness, energy efficiency and sustainability. The Porsche 99X Electric, which has been fielded in Formula E since 2019, also serves the Porsche engineers as a development platform for the sports car manufacturer’s electric production models. The vehicle’s 800-volt technology can also be found in the Taycan, Porsche’s first fully-electric production sports car, of which a prototype was unveiled to the world public in New York City in 2019.

In New York City, electromobility and sustainability are not the only key factors on this Formula E weekend. With more than 1,750 electric cars, the city boasts the country’s largest fleet of electric vehicles. This figure is planned to grow to 2,000 by the end of 2025. The metropolis is well on its way to achieving the goal of 10,000 publicly accessible charging stations by the end of 2021. The city's fleet of school buses is to be fully electric by 2035. And the people are completely behind this initiative: New Yorkers already consume less energy per capita than residents of any other state – except Rhode Island.

Formula E races will be contested on Saturday and Sunday on the Red Hook Circuit around the Brooklyn Cruise Terminal, with Lower Manhattan and the Statue of Liberty as a backdrop. Each race is contested over 45 minutes plus one lap – roughly the same time it takes to charge a Porsche Taycan twice from 5 to 80 per cent on the DC charger (350 kW). 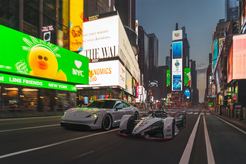 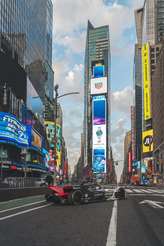