Stuttgart. Andrea Petkovic had to wait a long time for this win: at the Winners Open in Cluj-Napoca, the Porsche Team Germany claimed her seventh career WTA title on Sunday. It was her first tournament success since Antwerp in 2015. She comfortably beat the Egyptian Mayar Sherif 6-1, 6-1 in the final of the Porsche supported WTA 250 in the capital of the Transylvania region.

For the 33-year-old German, it was the second WTA final within the space of four weeks. She missed out on taking the title at the Hamburg European Open but in Cluj-Napoca an impressive performance brought her lean period to an end. On Saturday, she was forced to go out on court twice as her quarterfinal match against the Australian the day before was suspended due to bad light with the score at 6-7, 6-4, 5-1. After resuming, she immediately closed out the match by winning the first game and then in the semi-finals overcame the Serb Aleksandra Krunic 6-4, 6-2. Andrea Petkovic was also in top form on Sunday. Her opponent from Cairo, the world no. 119, who previously beat the No. 1 seed Frenchwoman Alize Cornet in the first round, was unable to cope with her powerful game. The German wrapped up the encounter with her first match point and promptly celebrated wildly on court before hugging her coach Petar Popovic.

“It was a fantastic week in a difficult time. I’m so happy with my win and thanks a lot to the sponsors and spectators for your support,” said Andrea Petkovic, who has moved up the rankings from No. 91 to 68th. Turning to her opponent, the first ever Egyptian to reach a WTA final, she said: “You are a role model for many young women in your region and you give them courage to live their dreams. It’s more important than every win.”


Porsche in tennis
Porsche has been sponsoring the Porsche Tennis Grand Prix ever since 1978 and has also been the organiser since 2002. The tournament in Stuttgart’s Porsche Arena was voted by the players as their favourite event in its category once again in 2019. Within the scope of its global partnership with the Women’s Tennis Association (WTA), Porsche is also the title partner of the “Porsche Race to Shenzhen”, the official qualifying ranking for the Shiseido WTA Finals. The Stuttgart-based sports car manufacturer is also the exclusive automotive partner of the WTA, the season-ending WTA Finals, and this year of the WTA tournaments in Lyon (France), St. Petersburg (Russia), Berlin and Bad Homburg (Germany), Cluj-Napoca (Romania) and Cincinnati (USA). As a premium partner of the “Deutsche Tennis Bund” (DTB – German Tennis Association), the company supports Porsche Team Germany in the Billie Jean King Cup (formerly the Fed Cup) and fosters up-and-coming players in the Porsche Talent Team and the Porsche Junior Team. Angelique Kerber, Julia Görges and Maria Sharapova give Porsche a face in tennis as Brand Ambassadors. 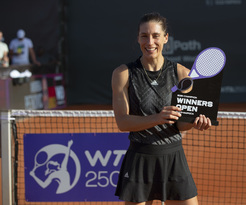 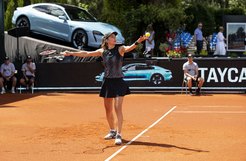