Stuttgart. Spectacular rallies, thrilled spectators and numerous top stars – the fifth day of the 45th Porsche Tennis Grand Prix was quite something. In front of an enthusiastic 2,550 crowd, local hero Laura Siegemund played a big part in everything as the Porsche Team Germany player beat the Slovenian Tamara Zidansek in the last match of the day. Things did not go quite so well for the Porsche Brand Ambassador Angelique Kerber who lost a tight three-setter against the world No. 6 Anett Kontaveit from Estonia. The winner of the long-standing Stuttgart tournament will receive a Porsche Taycan GTS Sport Turismo.

“It was a tough match which unfortunately didn’t quite go my way again. I’ve now lost my last matches in three sets. It hurts,” said Angelique Kerber after the 3-6, 6-4, 6-4 defeat. “In the end two, three points were again decisive – unfortunately not for me and I’m obviously a little disappointed.” The winner was full of praise for the two-time Stuttgart winner: “She played some good tennis and was very aggressive. Luckily enough I started to find my rhythm in the second set and adapted better and better to the clay court.”

A highlight in the Porsche Arena was served up by Laura Siegemund. The 2017 Stuttgart winner, who received a main draw wild card, gave Slovenia’s Tamara Zidansek no chance when winning in two sets, 6-3, 6-3. “You just can’t imagine how much this win means to me, even though it’s only the first round. I’m just glad to be able to play again. It means so much to me to be back on court in front of you all again,” said Siegemund in the direction of the numerous spectators still in the arena. “I haven’t played that many singles matches recently so I had no idea of what I was capable of. Then I realised early on that I was on song. I think I can draw a lot of confidence from today’s victory.”

For Eva Lys, who, after two wins in qualifying, stood for the first time in the main draw first round at a WTA tournament where she caused the first major upset at the Porsche Tennis Grand Prix, the tournament came to an end on Wednesday. Despite a plucky performance, the 20-year-old up-and-coming player from the Porsche Talent Team did not stand a chance in the round of the last 16 against Iga Swiatek. The Polish world No. 1 won her first ever match in Stuttgart 6-1, 6-1. “Eva battled for every point which didn’t make it easy for me. Even though I put her under a lot of pressure, she always came up with some great shots,” said Iga Swiatek when praising her opponent. “I had to be patient,” she said when looking back on her match with the reigning German champion. Eva Lys savoured the last day of her action-packed tournament week to the full. “I was so happy at being able to share the court today with the world No. 1,” she said. “It was amazing testing oneself against such a player, even though her intensity right from the first moment just blew me away. And there were nevertheless moments when I was able to impose my tennis and stay with her. It’ll give me lot of confidence.”

Emma Raducanu enjoyed a successful premiere in der Porsche Arena. However, she will be unable to savour her first appearance for very long. The 19-year-old Briton, the 2021 US Open champion and Porsche Brand Ambassador since March, cruised past the Australian qualifier Storm Sanders 6-1, 6-2. “The match wasn’t as easy as the result suggests. We had many close games that went to deuce,” she said after her first ever WTA Tour win on clay. “It makes me all the happier to advance to the next round and have the chance of gaining more experience on clay in the next few days. At the moment, I’m just enjoying playing tennis.

In the first match of the day, the world No. 7 Karolina Pliskova (Czech Republic) came out on top in the duel between the 2018 and 2019 Stuttgart winners. After a tough three-setter, she converted her first match point after two hours 23 minutes to beat her countrywoman Petra Kvitova 6-4, 4-6, 7-6. “We were both a bit nervous in the first set and made too many mistakes. We then produced our best tennis in the third and had some great rallies. It was a difficult match that first went one way and then the other,” she said in her analysis. “Petra is a great player who can hit winners from all over the court. She’s not somebody you’d like to face in the first round of a tournament.”

In the doubles on Wednesday, the Porsche Talent Team’s Jule Niemeier and Nastasja Schunk were in action against Alicja Rosolska (Poland) and Erin Routliffe (New Zealand). The match ended in a 6-4, 6-3 defeat for the Germans.

Six Top 10 players in action
A look at the order of play for Thursday shows the excellence of this year’s field at the long-standing Stuttgart tournament. Things are so tight on Centre Court that two Top 10 players – Ons Jabeur (No. 10) and Karolina Pliskova (No. 7) – have been scheduled for the smaller Court 1. The Tunisian will play not before 2.00 pm against Daria Kasatkina and Karolina Pliskova will follow against Liudmila Samsonova.

The first match of the day on Centre Court in the Porsche Arena at 12.30 pm will see the world No. 3 Paula Badosa (Spain) start her tournament campaign. She will face the Kazakh Elena Rybakina for a place in the quarterfinal. Canada’s Bianca Andreescu will be in action for the second time since her four-and-a-half month break immediately afterwards. The 2019 US Open champion will take on last year’s runner-up Aryna Sabalenka. The matches involving home players will not start before 5.00 pm. First up will be the local hero Laura Siegemund against the Greek Maria Sakkari and then the lucky loser Tamara Korpatsch will take to the court against the Porsche Brand Ambassador Emma Raducanu from Great Britain (not before 6.30 pm). The final match of the day will be between Anett Kontaveit (Estonia) and Ekaterina Alexandrova. 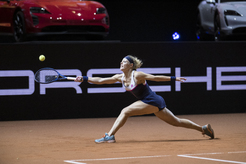 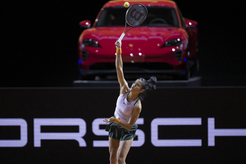 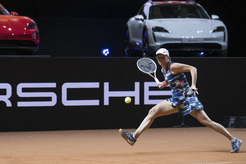 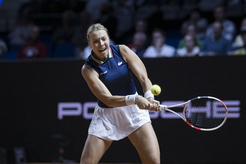 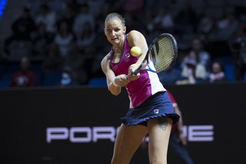