Five Top 10 players in the quarterfinals

Stuttgart. A real buzz in the crowd and tight matches on the courts where six Top 10 players were in last 16 action at the 45th Porsche Tennis Grand Prix. The 2,500 spectators in the Porsche Arena all got their money’s worth and still have high hopes of a German tournament winner. Though Laura Siegemund, who won the Stuttgart title in 2017, profited from the retirement of the world No. 5 Maria Sakkari (Greece), she had performed very impressively right up until the premature end. Also in the last eight is the Briton Emma Raducanu. The Porsche Brand Ambassador encountered more problems than initially expected against the German Tamara Korpatsch, but remains in contention for the main prize, a Porsche Taycan GTS Sport Turismo.

“I played an extremely good match. It’s not the way you want to win as it’s not so nice as winning in two normal straight sets. But against an injured top player, you still have to play at the top of your game,” said Laura Siegemund after reaching the quarterfinals. “My intention was to play very aggressively and quickly dominate the rallies. Even though I made one or two mistakes, my level of play was pretty good.” On Friday, the Porsche Team Germany player will face Liudmila Samsonova who she knows quite well. “We’ve practiced a lot together. It she gets out of bed on the right side, then she’s going to be really difficult opponent. Hopefully, it won’t be that way tomorrow.”

Earlier in the day, Liudmila Samsonova, the world No. 31, somewhat surprisingly knocked out Karolina Pliskova. On the smaller Court 1, she won 6-4, 6-4 against the 2018 Stuttgart winner. Ons Jabeur from Tunisia had a far more comfortable passage into the next round. The world No. 10 cruised past Daria Kasatkina 6-3, 6-3 to also book a place in the last eight.

In the first match of the day on Centre Court, Paula Badosa, the world No. 3, was forced to dig deep right up until the final point. It was in no small way down to her plucky opponent Elena Rybakina. After losing the first set, the Kazakh kept improving the longer the match lasted. In the end however, the Spaniard kept her nerve better in the third set tiebreak to eventually clinch a 6-2, 4-6, 7-6 victory in two hours thirty minutes.

“Today was my first match on clay this season, therefore my level was not as high as I would have wished. However, I was fully focussed right up to the last point. It was the key to me winning. Now I’m happy to have reached the next round,” said the victor after her debut match in Stuttgart. “One shouldn’t forget that it was a tough draw. I don’t normally meet a Top 20 player in my opening match. It shows the quality of the field at the Porsche Tennis Grand Prix.”

There was also little to choose between the world No. 4 Aryna Sabalenka and Bianca Andreescu, the 2019 US Open champion. Last year’s runner-up Sabalenka was forced to the full distance before eventually deservedly winning 6-1, 3-6, 6-2. “My service game at 4-2 in the third set was crucial. Bianca played incredibly well, and I feel fortunate to have won today. She put me under a lot of pressure,” said Aryna Sabalenka when praising the performance of the Canadian who has returned to the WTA after taking a four-and-a-half-month break. “I’m so happy with my win. The surface here is a little quicker than usual. It’s good for my game. I also really like the Porsche Arena and the atmosphere. The spectators turn the tournament into a special experience.”

The crowd also generated a fantastic atmosphere in the Porsche Arena for the contest between the Porsche Brand Ambassador Emma Raducanu and Tamara Korpatsch. It was mainly down to the German’s courageous performance. After losing the first set to love, the lucky loser took the second from the 2021 US Open winner. However, it was the Briton that eventually prevailed when winning 6-0, 2-6, 6-1. “Tamara played some incredible tennis in the second set. Hats off. For me it was important to ride the storm and believe it would be enough to win in the end,” said the world No. 12 who will now take on Poland’s Iga Swiatek who is on a 20-match winning streak. But I won’t be under any pressure and I’m looking forward to the match.”

Midnight was approaching fast in the Porsche Arena when the Estonian Anett Kontaveit clinched victory against the surprisingly strong Ekaterina Alexandrova 2-6, 6-3, 7-6. The world No. 6 will now tomorrow meet Aryna Sabalenka in the duel between two former Stuttgart runners-up. “The match was full of tight points,” said Kontaveit. “It’s why I tried to stay calm and concentrate on the next point.”

Attractive quarterfinal matches on Friday
Quarterfinal Friday at the Porsche Tennis Grand Prix is going to be some day. It will start at 12.30 pm with the encounter between Ons Jabeur (Tunisia) and Paula Badosa (Spain). Next up – but not before 2.00 pm – Aryna Sabalenka will meet Anett Kontaveit. In the third match, the local hero Laura Siegemund will take on Liudmila Samsonova for a place in the semifinals – not before 5.00 pm. The Polish world No. 1 Iga Swiatek will also be attempting to progress to the last four in the day’s last match. She will have her work cut out as she has to face the Porsche Brand Ambassador Emma Raducanu (Great Britain) – not before 6.30 pm.


Further information, film and photo material in the Porsche Newsroom: newsroom.porsche.com
The consumption and CO2 emission values were calculated according to the new Worldwide Harmonised Light Vehicle Test Procedure (WLTP). The NEDC values derived from this must continue to be specified for the time being. These values cannot be compared to the values calculated based on the NEDC measuring procedure used up to now. 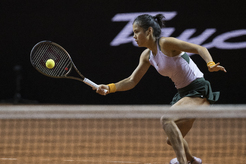 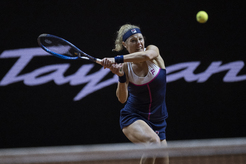 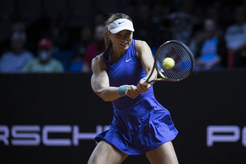 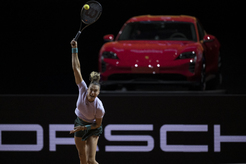 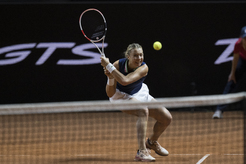 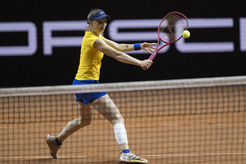