Thrilling quarterfinals in the Porsche Arena – favourites win through

Stuttgart. Paula Badosa, Aryna Sabalenka, Liudmila Samsonova and Iga Swiatek are the four top players that will be battling on Saturday for a place in the Porsche Tennis Grand Prix final. The 3,550 spectators in the Porsche Arena witnessed hard-fought and enthralling quarterfinal matches on Friday. Laura Siegemund’s dream of a second Stuttgart title after 2017 is however over as the local hero was beaten 7-5, 6-3 by Liudmila Samsonova. Also no longer in the running is the Porsche Brand Ambassador Emma Raducanu (Great Britain) after she lost 6-4, 6-4 to the world No. 1 Iga Swiatek.

“Normally frustration is the overriding feeling after such a defeat. It’s not the case today. There were many good points to my game that I can build upon,” said Laura Siegemund, who bid farewell from her home tournament with lots of positives: “It was a first step on the long road back after injury. I first want to get back into the Top 100. It’s my big goal. But I’d like to take one step after the other.”

The top-seeded Iga Swiatek once again produced a dominant performance against Emma Raducanu to extend her winning run to 21 matches. Fully focussed right from the start, the Pole always had the right answer in the few tight moments. She appears to be adapting better and better to the conditions in the Porsche Arena. “I’m so happy that the match today took a bit longer. Every minute I’m able to play on the surface helps me to get used to the clay. I’ve got an excellent attacking game at the moment,” said Iga Swiatek who will be up against Liudmila Samsonova who downed Laura Siegemund. “She’s currently in very good form. I know her from the juniors as there’s not much of an age gap between us. But if I manage to concentrate on my game, then I’ll be in with a good chance.”

Paula Badosa wins top class match
World No.3 Paula Badosa had her work cut out when beating Ons Jabeur in the first match of the day. Like on the day before, she had to go the full distance but again kept her nerve to win 7-6, 1-6, 6-3. The two Top 10 players served up a high-class contest. “Mentally and physically, it’s enormously tiring having to play three-setters, especially against Ons who’s such a fantastic player. It’s extremely difficult to beat her,” said Badosa. “But I’m a fighter and didn’t give up after losing the second set. It makes me even happier about winning.”

The Spaniard was doubly happy as, after reaching the semifinals in Stuttgart, she will now move up a place to second in the WTA rankings on Monday. “I’ve been aiming for it in the past few tournaments,” she said. “Great that it’s worked out here in Stuttgart. I really the place and I have nothing against winning the title on Sunday. Awaiting her in the semifinal is another Top 10 player in the shape of Aryna Sabalenka.

The world No. 4 and last year’s runner-up knew exactly what in store for her against Anett Kontaveit. They also met in the quarterfinals of last year’s Porsche Tennis Grand Prix when the former eventually prevailed in a tight three-setter. It was more of the same this year as Aryna Sabalenka eventually ran out a 6-4, 3-6, 6-1 winner after one hour 45 minutes. “The third set went perfectly for me as I played very well. It was a tough match and I’m so happy to have won it. Every match with Anett is a tough battle. But today I really enjoyed every minute on the court, and it was decisive in the end.”

Saturday’s semifinals promise world class tennis
Four players still have hopes of winning the main prize at the Porsche Tennis Grand Prix – a Porsche Taycan GTS Sport Turismo. The first semifinal – not before 2.00 pm – will see a duel between the two friends Aryna Sabalenka and Paula Badosa (Spain). The former stood in the final of the 2021 Porsche Tennis Grand Prix and would like to repeat the feat. The day’s second match will be between Liudmila Samsonova, the only unseeded player in the penultimate round, and Iga Swiatek from Poland. The match will start not before 4.00 pm. The two singles semifinals will be sandwiched in between the doubles encounters. Cristina Bucsa (Spain) and Tamara Zidansek (Slovenia) will face Desirae Krawczyk (USA) and Demi Schuurs (Netherlands) at 12.00 midday. In the day’s final match, Coco Gauff (USA) and Shuai Zhang (China) will meet Shuko Aoyama (Japan) and Hao-Ching Chan (Taipeh) – not before 6.00 pm. 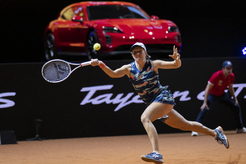 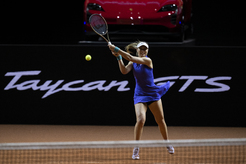 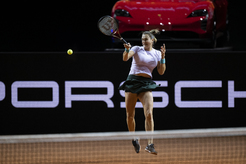 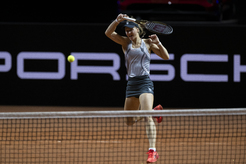 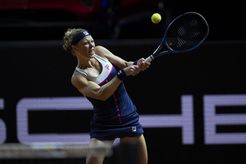