Iga Swiatek and Aryna Sabalenka in the final

Stuttgart. Tantalising final at the Porsche Tennis Grand Prix – Iga Swiatek and Aryna Sabalenka will go head-to-head on Sunday for the win at the 45th edition of the long-standing Stuttgart tournament, and the main prize, a Porsche Taycan GTS Sport Turismo. The 4,150 spectators in the almost sold-out Porsche Arena generated a magnificent atmosphere on semifinals Saturday, one that also impressed Aryna Sabalenka: “The fans make this tournament so special. Thanks for the super atmosphere.”

She was speaking only moments after defeating Spaniard Paula Badosa in two enthralling sets, 7-6, 6-4 to qualify for the final of the WTA 500 tournament. “It was an extremely tough match against a very good opponent in which I had trouble finding my rhythm at first. Then when I was a break down, I told myself that I didn’t have anything to lose. And then I really did start to feel better from point to point,” said Aryna Sabalenka after the match against her good friend Paula Badosa. In the first set, the two Top 5 players both slugged it out producing some spectacular rallies before last year’s runner up eventually prevailed. “You get mentally stronger with every win. It’s happening this week. Now I’d like to go on and win the Porsche.”

The second semifinal was as tense as they can come and the Polish world No. 1 Iga Swiatek was forced to dig very deep when winning 6-7, 6-4, 7-5 against the unseeded Liudmila Samsonova. The victory has now extended her winning streak to 22 matches. “The match felt like a marathon. Good that I played so fearlessly and was able to hit the ball consistently into court. Today, I definitely had to play my best tennis,” said the Pole after her hard-fought victory. “I obviously don’t have much time until midday tomorrow but I’m physically ready and will give everything I have to win the tournament.”

Finals Sunday with world class tennis und ballet
Sunday’s singles final will begin at 1.00 pm. The crowd will be fine-tuned for the highlight of the tournament by a premiere performed by the Stuttgart Ballet. Supported by Porsche as a partner, the world-famous company will present a piece to music composed by the Israeli musician and DJ Ori Lichtik. The doubles final will take place immediately after the singles victory ceremony. Desirae Krawczyk (USA) and Demi Schuurs (Nehterland) will meet Coco Gauff (USA) and Shuai Zhang (China). The money raised through the Aces for Charity campaign will also be handed over to the “Stiftung Agapedia” foundation and the “Landessportverband Baden-Württemberg” sports association. 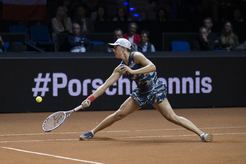 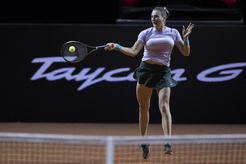 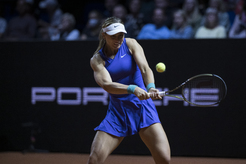 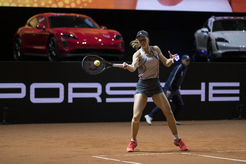 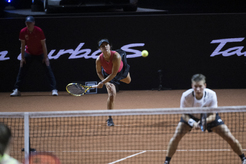 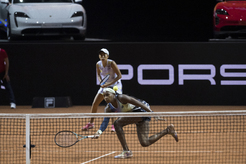