Stuttgart. Successful Grand Slam dress rehearsal for Angelique Kerber: one day before the start of the French Open in Paris, the Porsche Brand Ambassador won the WTA 250 tournament in Strasbourg to boost her self-confidence going into to the clay court highlight in Roland Garros. In a thrilling final lasting three hours 16 minutes, the 34-year-old German overcame the Slovenian Kaja Juvan 7-6, 6-7, 7-6 with a fine battling performance.

“There’s no better motivation for the French Open,” said Angelique Kerber after winning her 14th career title. “It was a fantastic week. I improved with each match and I now hope I can conserve my good form for Paris.”

It was an incredible Internationaux de Strasbourg final. In summerly temperatures, both players went to their limits and thrilled the crowd with spectacular rallies. Two years ago at the 2020 French Open, Angelique Kerber lost her opening match against Kaja Juvan. This time around, the two-time winner of the Porsche Tennis Grand Prix triumphed after producing her best tennis of the season. It was the second longest match of her career. Only in the second round of Wimbledon in 2021 was she on court longer when she needed 3 hours 19 minutes to defeat the Spaniard Sara Sorrides Tormo.

For Angelique Kerber, it was her first tournament win since her success at the 2021 Bad Homburg Open on grass. Her last clay court title came six years ago. In April 2016, she won the final of the Porsche Tennis Grand Prix in Stuttgart against Laura Siegemund. Today’s win means she will return to the world Top 20 and will be ranked 17th from Monday. 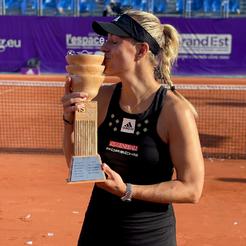 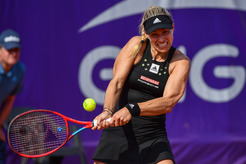 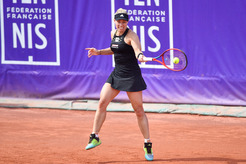