Stuttgart. Season 8 of the ABB FIA Formula E World Championship draws to a close with a premiere and a jubilee at the Seoul E-Prix on 13 and 14 August. The innovative electric racing series will be held for the first time in the South Korean capital – with the 99th and 100th races of its illustrious history contested on the Seoul Street Circuit.

The TAG Heuer Porsche Formula E Team fields two Porsche 99X Electric race cars at the final races of the season – with drivers Pascal Wehrlein (GER/#94), who claimed Porsche’s first Formula E victory this year in Mexico City, as well as André Lotterer (GER/#36), who after three years will contest his last event for the team.

Rounds 15 and 16 of this season are the last outings for the Gen2 electric racers. Formula E enters a new era in season 9 with the Gen3 cars. Florian Modlinger, Director Factory Motorsport Formula E said: “In Seoul, we want to show what we’re capable of with the Gen2 car before throwing ourselves into intense preparation for Gen3.”

Q&A on the Seoul E-Prix

Florian Modlinger, Director Factory Motorsport Formula E
Season 8 turns on to the home stretch. How do you rate your season ahead of the final races in Seoul?
“We had a tough start and then made a strong comeback with a sensational one-two in Mexico. That was the highlight of the season for our team. We were also strong in Rome and Monaco. In Rome, André fought for the lead; in Monaco, Pascal was at the front of the field but retired with a technical problem. After that, we didn’t manage to achieve what we’d set out to do. We struggled in London, too, especially with overtaking. In Seoul, we’re now hoping to wrap up the season successfully.”

How excited are you about the fact that all teams will tackle the 2023 season on a level playing field with the new Gen3 cars?
“It’s always great when you can start with a blank sheet of paper with a new car. The cards are reshuffled. We need to prepare perfectly and show what we’re capable of. I’m very excited about the new Formula E era. It’s the first time that I’ve been able to help Porsche prepare for a new season. I’m looking forward to it.”

André Lotterer, Porsche works driver (#36)
You contest your last races for the TAG Heuer Porsche Formula E Team in Seoul. How do you feel about saying farewell?
“To be honest, I haven’t really given it much thought. There’s just been too much to do over the last few weeks. In any case, I’m really grateful for the last three years with the team and our partners. We’ve experienced highs and lows together. It was an honour to start a new chapter in motorsport with Porsche and this terrific team. Highlights like our second place at the very first race in Diriyah and our one-two result in Mexico are etched in my memory. In retrospect, we’d definitely hoped for a bit more, but that was never due to a lack of dedication. I always gave everything I had and so did the team.”

How do you rate your chances for a successful end to the season in Seoul?
“The chance is always there – now we just have to grab it. If we do a good job and pull it all together perfectly, nothing stands in our way. Things didn’t go so well for us in London recently, but we were strong on other circuits. There are definitely some Formula E racetracks that suit our car better than others. I hope that the Seoul track is such a circuit and that we can wrap up the season with a win.”

Pascal Wehrlein, Porsche works driver (#94)
The track in Seoul is new for all drivers. Do you see this as an advantage and how much are you looking forward to it?
“A new circuit always brings opportunities to do things better than in the past. I’m excited for Seoul, for the city, the country and to get to know another new track. I hope we’ll have two very good races. In any case, we’ll do our utmost to bring this difficult season to a successful end.”

Season 8 concludes in Seoul. What’s your review as you head to the final races?
“We’ve seen what our strengths and weaknesses are. We had our strongest weekends on the faster circuits like Mexico City and Monaco. We struggled on racetracks with a lot of slow corners, like in London recently. Over the season we’ve progressed, but we threw points away and revealed weak areas that still have to be remedied. I hope we can do this in Seoul and then enter the Gen3 era with renewed confidence.”

The circuit
The Seoul Street Circuit is 2.618-kilometres long and features 22 turns. The circuit is located in the Seoul Sports Complex in the district of Songpa-gu, with part of it running through the Olympic Stadium. Seoul was scheduled to host a Formula E event in 2020, however, it had to be postponed twice due to the pandemic. The Seoul E-Prix debut is part of the “Seoul Festa” tourism festival with many concerts and events.

Live TV and Internet coverage
The worldwide broadcasting schedule of the Formula E event in Seoul is available on: https://www.fiaformulae.com/watch/ways-to-watch.

Media service
The first photos from Seoul will be available on the Porsche press database on 12 August. The race reports will follow on 13 August (race 15) and 14 August (race 16). Further information about the TAG Heuer Porsche Formula E Team will be posted live on the Twitter channel @PorscheFormulaE. All relevant information about the team, the drivers and the racing series can be found in the updated Porsche Formula E Media Guide on media.porsche.com/formulae. The content will be regularly updated over the course of the season and expanded with additional interactive material.

Porsche 99X Electric
With the Porsche 99X Electric, Porsche returned to open-wheel single-seater racing in 2019 after more than 30 years. The fully-electric racing car sporting the Weissach-developed Porsche E Performance Powertrain also serves as a development platform for the sports car manufacturer’s fully-electric production models. Energy management and efficiency are important factors for success in Formula E and in the development of production cars. For the 2021/2022 season, the 99X Electric has a maximum output of 250 kW in qualification mode and 220 kW in normal race mode. Attack Mode boosts the output to 250 kW. Maximum recuperation is 250 kW; the usable battery capacity is 52 Kilowatt-hours.

Porsche Taycan Turbo S as the new safety car
Porsche is committed to Formula E safety: With the all-electric Taycan Turbo S, the sports car manufacturer supplies the official safety car this season and underlines the importance of Formula E for Porsche Motorsport. Thanks to its driveability and safety as well as an output of up to 560 kW (761 PS), Porsche’s first all-electric sports car is the ideal choice as a safety car in the world’s first electric racing series. With Launch Control, the flagship model of the Taycan range accelerates from 0 to 100 km/h in 2.8 seconds and reaches a top speed of 260 km/h. The striking paintwork incorporates the colours of all eleven competing teams as well as the FIA and Formula E colours. The design symbolises the joint commitment to the future of all-electric motor racing as well as social values such as diversity and community.

Formula E
Formula E is the world’s first fully-electric racing series bringing thrilling motorsport to people living in major cities since 2014. As an accelerator for innovative and sustainable technologies of mobility, it promotes the worldwide acceptance of electric vehicles with the aim to counteract climate change. The format is compact: practice, qualifying and race all take place on one day. Each race usually runs over 45 minutes plus one lap. Eleven teams tackle the 2021/2022 season with 22 drivers. This makes for interesting and hotly contested races. This marks the third season for the TAG Heuer Porsche Formula E Team campaigning the Porsche 99X Electric. 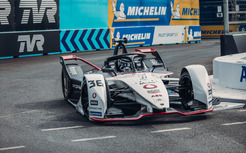 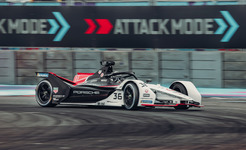 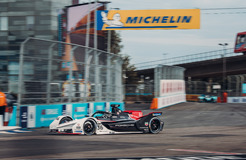 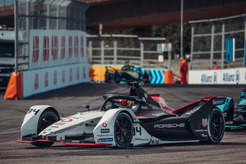 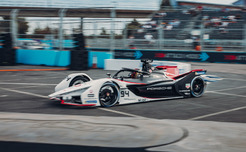 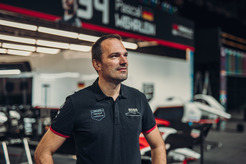 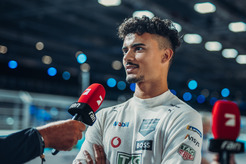 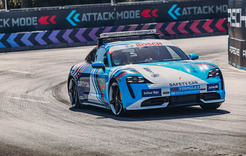