A chat with Markus Günthardt, Tournament Director of the Porsche Tennis Grand Prix

“The quality we offer is unequalled worldwide.”

Stuttgart. Markus Günthardt has seen a lot in his 12 years as the Tournament Director of the Porsche Tennis Grand Prix. The move from Filderstadt to the Porsche Arena, the change to clay, the first win by a German player. A tingle was however sent down the spine of the Swiss by the ecstasy of the crowd when local hero Laura Siegemund’s winning run took her all the way to the final in 2016: “There was an atmosphere in the hall of a kind that I had never experienced before.”

Talking about the 40th edition of the long-standing Stuttgart tournament, he said …

... 40 years of the Porsche Tennis Grand Prix:
“It really is an incredible event especially when remembering that the tournament has been called the Porsche Tennis Grand Prix right from the start and Porsche has always been on board as a sponsor. Such a constancy over such a long time is not only seldom in tennis but in professional sport generally. It’s what also make this tournament so unique.”

... the importance of the tournament in women’s tennis:
“The quality we offer in every area is unequalled worldwide. Image and esteem-wise, we’re seen as a big tournament even though prize money-wise, we’re not. The high esteem the tournament enjoys can be seen alone in the fact that the WTA will be coming to us with all their important committees for a second time this year. The WTA sees our tournament as a showcase and wants to show the other tournament directors how attractively women’s tennis can be presented.”

… the tournament field with numerous Top 10 stars:
“We’ve set the bar very high in the past years. To become even better in this area is practically impossible. Having so many Top 10 players here every year is a wonderful endorsement of our efforts. Even though it’s almost the norm for the Porsche Tennis Grand Prix, it does show that we’re obviously doing a lot right. However, it’s not a fantastic field of players alone that makes a good tournament. For me as the tournament director, what counts above all is that we have a full hall and a great atmosphere no matter who’s on court.”

… Angelique Kerber’s chances of retaining her title:
“For me, she’s the top favourite. I can’t see why she shouldn’t win again. I think she’s now at the very top of the game and has established herself amongst the world’s top three players. Becoming the No. 1, ending the season as the No. 1 and starting the new one as the No.1 is a new situation for her and one she has to get to grips with. However, when she does come to terms with it all, then she will be back being the Angelique that thrilled us all last year – and then everything is possible.”

... Maria Sharapova’s return:
“I’m delighted for her that she’s returning. And I’m delighted for our audience that she’s doing it at the Porsche Tennis Grand Prix. Her comeback is bringing us a lot of international attention. She’s after all one of the superstars in women’s sport, not only in tennis.”

… the Porsche Tennis Grand Prix as a crowd puller:
“We’ve got a fabulous crowd in Stuttgart and we do everything so that it remains loyal. It’s obviously working. World class tennis alone doesn’t suffice to fill a hall in the long run. Many visitors spend the whole day here. They don’t only want to watch tennis for hours on end but experience something extra. We offer them an attractive supporting programme with a colourful mixture of sport and entertainment – in an atmosphere in which people feel at ease. The Porsche Tennis Grand Prix, and it’s very important for us, has to be an event for the whole family.”

… the popularity of the tournament amongst the players:
“We do everything for the players and try to anticipate their every wish. We want them to feel at home here and find playing conditions where they can perform at their best. It is obviously working. In 2016, the players voted us as their favourite tournament for the eighth time since 2007. It’s an accolade which we can be proud of and it’s also a spur to continue working hard.”

... his 12 years as the tournament director:
“There have been very many highlights during my tenure. One was the move from Filderstadt to the Porsche Arena in 2006. It was a big challenge and also an enormous chance. The same goes for the change from autumn to spring in 2009, and on clay. A top highlight was 2011 and Julia Görges’ win. I had always wished that one day we’d have a German player capable of winning. And then up pops Julia virtually out of nothing and wins the tournament. What I’ll also never forget is the fantastic atmosphere last year in the Porsche Arena when Laura Siegemund stormed her way to the final. I had never experienced anything like it before.”

Markus Günthardt has been the tournament director of the Porsche Tennis Grand Prix since 2005. Born in Zürich on 10 September 1957, the Swiss was himself a professional player on the ATP Tour from 1978 to 1985. In this time, he also played for Switzerland in the Davis Cup. He remained in the game after his playing career. Working for Ion Tiriac, he organised various tournaments such as the Eurocard Open in Stuttgart and the ATP Tour World Championships in Hannover. He acted as a consultant for the Turkish Tennis Association at the WTA Championships which were played in Istanbul from 2011 to 2013. His experience is in demand worldwide also in the WTA Board of Directors. Markus Günthardt lives with his wife and two children in Madrid and in Switzerland.

A chat with Markus Günthardt, Tournament Director of the Porsche Tennis Grand Prix: "The quality we offer is unequalled worldwide." 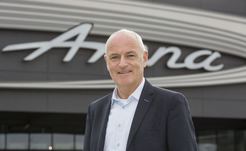