Stuttgart. Porsche Junior Dennis Olsen (Walter Lechner Racing Team) is the winner of Saturday’s round seven of the Porsche Mobil 1 Supercup. On the rollercoaster circuit in Belgium’s Spa-Francorchamps, the 21-year-old Norwegian beat the 30-strong international field at the wheel of his Porsche 911 GT3 Cup. Mattia Drudi (Dinamic Motorsport) from Italy clinched second place, with Michael Ammermüller (Lechner MSG Racing Team) from Germany claiming the third grid spot. “This win feels really good. It’s the first time I’ve driven here in dry conditions and I first had to get used to the braking points. It must have worked quite well, otherwise I wouldn’t have won,” said Olsen, with a laugh.

Eleven races on eight weekends make up this year’s Porsche Mobil 1 Supercup calendar. Spa-Francorchamps hosts a double-header, with drivers from 16 countries contesting round seven on Saturday and round eight on Sunday. Olsen posted pole position for both races, and today managed to convert it into an early lead. But his rivals didn’t make it easy for him: Drudi stayed glued to Olsen’s bumper over the first five laps, with the current championship leader Ammermüller doing the same to Drudi. In lap six, however, Olsen managed to eke out a one-second advantage and from that point proceeded to bring the race home.

For Drudi, this marks his first time this season in the top three: “I’m very, very happy to climb the podium in second. Michael Ammermüller gave me a hard time in the race, but I was able to fend him off. I was also very pleased with the setup of my car. Things can continue like this,” said Drudi. Ammermüller claimed the third grid spot. “There was no way for me to get past Mattia Drudi. He was slightly faster than me on the straights, however I caught him in the corners. I’d hoped for more, but for the time being I have to settle for third place,” said Ammermüller.

Daniel Cammish (Lechner MSG Racing Team) crossed the finish line in fourth place. In the eleven-lap race over 76.920 kilometres, the British driver set the fastest race lap in 2:26.287 minutes. Fifth went to Robert Lukas (PL/Olimp Racing) ahead of Porsche Junior Matt Campbell (AUS/Fach Auto Tech). “That wasn’t an easy race. I had several tough battles for positions early on and it took some time for me to push through. My car’s balance was good,” explained Campbell. Egidio Perfetti (NL/MOMO-Megatron Team Partrax) was the fastest driver in the B category. 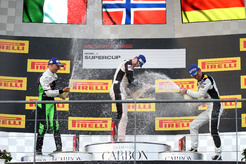 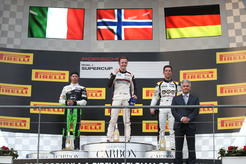 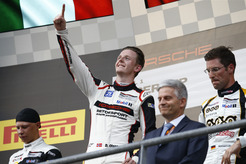 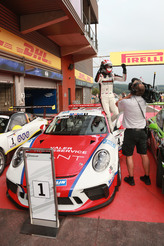 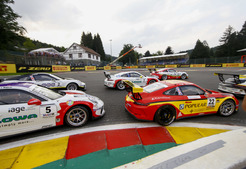 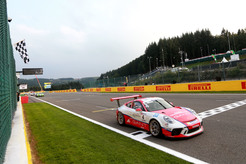 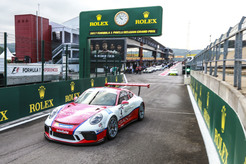 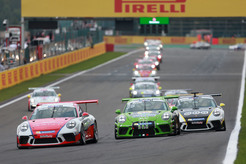 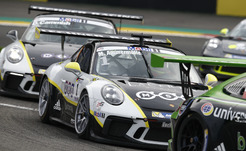 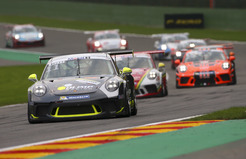 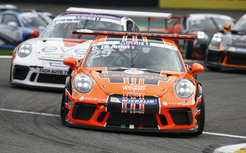 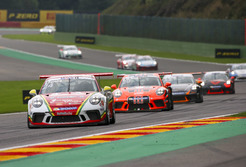