Stuttgart. Laura Siegemund celebrated the biggest win of her career on 30 April 2017 – and did it in front of her home crowd. Playing in the sold-out Porsche Arena, the 29-year old from Filderstadt sensationally won the 40th Porsche Tennis Grand Prix. She collected the main prize for her masterful performance from the Stuttgart Porsche Center on Monday – a Porsche 911 Carrera 4 GTS Cabriolet in her chosen special colour, “frozen berry metallic”. The key for the winner’s car was handed over by Anke Huber, the Operating Tournament Director of the Porsche Tennis Grand Prix and Franko Dorow, the director of the Stuttgart Porsche Center.

“It’s for sure the most coveted winner’s trophy on the WTA Tour and it was an unbelievable feeling when I won it,” said Laura Siegemund, who has been out injured for most of the year. She however has had to overcome a number of setbacks in her career and is also now looking positively into the future: “I definitely want to be back competing at the 2018 Porsche Tennis Grand Prix.” 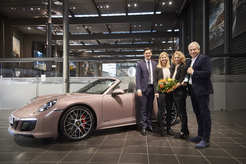 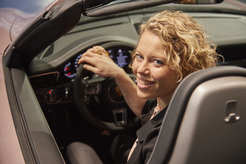