Stuttgart. Porsche will remain the title partner of the official WTA Finals qualification ranking, the “Porsche Race to Shenzhen”. The year’s eight most successful women players will come together at the season-ending championships for the first time next year in the modern and technologically-emergent metropole in south east China from 27 October to 3 November. In extending the successful partnership with the Women’s Tennis Association (WTA), Porsche will retain its status as the official and exclusive automotive partner of the WTA and the WTA Finals.

“The WTA Finals are one of the year’s sporting highlights and have developed into an event with worldwide appeal. We’re delighted to be a part of the success story through our long-standing partnership with the WTA, the ‘Porsche Race to Shenzhen’ and as a partner of the WTA Finals,” said Detlev von Platen, member of the Executive Board responsible for Sales and Marketing at Porsche AG. “As a tech-city in one of our core markets, Shenzhen is an international showcase project for the electrification of passenger conveyance. The new WTA Finals venue is therefore an excellent complement for Porsche’s future orientation.”

With the qualifying race carrying its name, Porsche is visible worldwide at every WTA tournament and will additionally enhance its presence at selected events. Porsche will also continue as the sponsor of the “Porsche Race to Shenzhen Challenge”, the WTA’s annual online fantasy game. The company is therefore highlighting the internationalization of its involvement in women’s tennis.

How the Porsche Race to Shenzhen works
The Porsche Race to Shenzhen is the official qualifying race for the WTA Finals. Starting places are given to the eight most successful singles players and doubles pairings. Crucial are the placings in the year-long Porsche Race to Shenzhen. The best results for every player at the 57 tournaments (53 WTA events plus four Grand Slams) staged prior to the WTA Finals count toward the qualifying ranking. Every tournament is symbolized as a lap with its own pitstop. The player with the most points in the singles race will be rewarded with a Porsche. In each of the past two years, the Romanian Simona Halep secured herself a sports car. After five years in Singapore, the prestigious tournament will be hosted for the first time in Shenzhen, a city with a population of 12 million that links Hong Kong with mainland China.

Porsche in women’s tennis
Porsche has been sponsoring top class women’s tennis for more than 41 years. Everything began in 1978 with the Porsche Tennis Grand Prix which has since developed into one of the showcase tournaments on the worldwide WTA Tour. The 42nd edition of the long-established event with the world’s best players will take place in Stuttgart’s Porsche Arena from 20 to 28 April 2019. Moreover, the Zuffenhausen-based sports car manufacturer supports the Porsche Team Germany in the Fed Cup and fosters hopeful up-and-coming players in the Porsche Talent Team together with the “Deutschen Tennis Bund” (DTB – the German Tennis Association). The world class players Maria Sharapova, Angelique Kerber and Julia Görges, all winners of the Porsche Tennis Grand Prix, represent Porsche as Brand Ambassadors.

Pitstop Board Porsche Race to Shenzhen 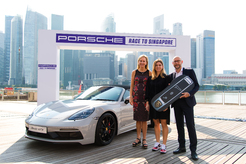