Stuttgart. She is the new star in women’s tennis – and has now entered the Porsche Tennis Grand Prix: Naomi Osaka, who has taken over at the top of the world rankings after her victory at the Australian Open, will compete at the long-standing tournament in the Porsche Arena from 20 to 28 April. The 21-year old Japanese, who also won the US Open in September 2018, will be in good company. For the first time since 2012, all the current Grand Slam winners will be appearing in Stuttgart. Naomi Osaka will be joined by Simona Halep (Romania), the French Open winner and world number 3, and the Wimbledon champion and Porsche Brand Ambassador Angelique Kerber (number 6). A total of seven Top 10 players are expected at the 42nd edition of the Porsche Tennis Grand Prix.

“We’re delighted that Naomi has confirmed her entry. That the recently-crowned Australian Open champion has decided to come to our tournament is like the famous frosting on the cake,” says Tournament Director Markus Günthardt. “It means we can again present our spectators with a fantastic line-up of players, including the number 1, all the current Grand Slam winners and seven Top 10 players – it doesn’t come much better.”

Also competing will be the Porsche Brand Ambassadors and former Stuttgart champions Maria Sharapova (Russia/2012, 2013, 2014) and Julia Görges (Germany/2011). Tennis fans can also look forward to the shooting star Danielle Collins (USA) whose impressive displays at the Australian Open took her to the semi-finals. It will be her first time in Stuttgart.

Infographic: All the current Grand-Slam-winners at the Porsche Tennis Grand Prix 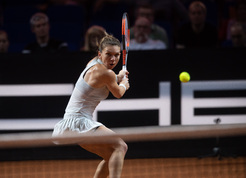