Successful in the luxury class since 2009

Stuttgart. Ten years ago, Porsche launched into a new market segment. With the Panamera, the sports car manufacturer presented its first Gran Turismo in April 2009. Like no other car in the luxury car class, this model combines the performance one would expect from a sports car with the luxury and versatility of a touring saloon. While Porsche initially planned production of 20,000 units per year, the Panamera has long since exceeded all expectations: more than 235,000 cars have been delivered so far.

“As a technology platform for innovations that were later transferred to other models, the Panamera has played a significant role in shaping the past ten years of the brand’s history,” explains Michael Steiner, then first Vice President of the product line, today Member of the Executive Board Research and Development. “With its high-performance hybrid variants, it is now above all a trailblazer for electromobility at Porsche.” The current, second model generation is manufactured entirely in the Porsche plant in Leipzig, and comes in three different body variants. Thomas Friemuth has been Vice President of the product line since May 2018.

First four-seater Porsche prototype based on the 356
A Porsche for four – over the course of the company’s more than 70-year history, Porsche engineers kept coming back to this idea. In the 1950s, they developed a comfortable four-seater based on the 356. The Type 530 had a lengthened wheelbase, larger doors and a raised roof at the rear. Others followed, including a four-door prototype based on the 911 and, in the 1980s, lengthened variants of the 928. Ferry Porsche used one of these as his private car. In 1988, Porsche made a new attempt with the Type 989: the four-door coupé offered space for two full seats in the rear. The drive power was provided by a V8 front engine. Design elements from the 989 were later incorporated into the 911 of the 993 generation. Like all similar concepts before it, however, the 989 remained a prototype. For economic reasons, development was discontinued at the start of 1992.

Mirage, Meteor and Phantom: green light for the Panamera
At the beginning of the new millennium, Porsche conducted market studies, analysed the competition and decided to develop a four-door hatchback saloon. Stepping into the luxury class was to no small extent the wish of then Chairman of the Executive Board, Wendelin Wiedeking. Included in the specifications were outstanding driving dynamics, generous space conditions and a quintessentially Porsche appearance. Michael Mauer, Vice President Style Porsche, adds: “We wanted to build a four-seater sports car with a fast roofline, large tailgate and hatchback.” During the design process, the three concepts “Mirage”, “Meteor” and “Phantom” emerged. The later production model would have most in common with the muscular-looking Mirage. In the end, elements from all three variants were used – and a new name was chosen: Panamera, inspired by the Mexican endurance race “Carrera Panamericana”.

High up in Shanghai: world premiere in a lift
The Panamera’s first official appearance on April 19, 2009 was spectacular: Porsche invited media from all over the world to a press conference on the 94th floor of the World Financial Center in Shanghai. The Panamera was manoeuvred upright into a freight lift by means of a purpose-built carriage. This took 60 members of staff several hours, and just one minute for the lift to ascend 400 metres.

The first Panamera – known as G1 internally – set standards in its class thanks to the wide spread between sportiness and comfort. And it was packed with innovations: for the first time, a luxury class production model was offered with a transmission and start-stop system. The top model Panamera Turbo also introduced air suspension with additional air volume on demand, as well as an adjustable, multi-dimensionally extendable rear spoiler. The Gran Turismo also set the course for all other Porsche model lines with its new display and operating concept.

The model range grew rapidly and sustainably, culminating in an engine range covering power output from 250 to 550 PS with petrol, diesel and hybrid drives as well as rear-wheel and all-wheel drive. In the beginning, the naturally aspirated V6 and V8 engines were available with a six-speed manual transmission. Most customers opted for the seven-speed Porsche dual clutch transmission PDK. Diesel and hybrid drives were available in combination with an eight-stage automatic transmission.

The Executive variant with extended wheelbase – mainly for Chinese customers – appeared as part of the 2013 facelift. The engines became more powerful, developing up to 570 PS. The Panamera has been hugely important for Porsche: the Gran Turismo established the brand in a new market segment – and helped to firmly anchor it in the strong growth market of China.

All new: the second model generation from 2016 onwards
The development of the second Panamera generation (G2) involved multiple streams: in addition to the Gran Turismo with a standard and extended wheelbase, a third variant was developed on the same platform: the Sport Turismo. As from 2017, its avant-garde design and body concept brought more versatility to the luxury vehicle class. The “Concept Sport Turismo” was presented for the first time at the Paris Motor Show in 2012. The much-noticed concept was a precursor to the second Panamera generation, which celebrated its world premiere on June 28, 2016.

The G2 was even sportier and more elegant, but with the same generous space: the roofline fell away sooner, the rear had a slight counter curve, the horizontal tail lights emphasised the brand identity. The sporty body once again housed a number of innovations, including a new, digitised display and operating concept. Thanks to chassis systems like the three-chamber air suspension, rear-axle steering and the PDCC Sport electromechanical roll stabilisation system, the Panamera was as at home on the streets as it was on the track. This was underpinned by a lap time of 7:38 minutes on the Nürburgring-Nordschleife – set by Porsche works driver Lars Kern in a standard Panamera Turbo. The engine range was consistently optimised, while the power output values were increased: new engines were introduced across the range, and the transmission was now an eight-speed PDK. The power output spectrum started at 330 PS, today the top model is a 680 PS plug-in hybrid.

Hybrid models with the boost strategy of a supercar
Porsche set the stage for electromobility with the Panamera in 2011. As the first parallel full hybrid in the luxury class, the Panamera S Hybrid was the most economical Porsche to date despite a power output of 380 PS. Two years later, the Panamera S E-Hybrid once again led the way in the segment as the world’s first plug-in hybrid – with 416 PS and an all-electric range of 36 kilometres. In the second Panamera generation, Porsche embraced electric performance across all model variants: the boost strategy adapted from the 918 Spyder supercar enabled performance of the kind typically associated with sports cars, but combined with high efficiency – both in the 462 PS Panamera 4 E-Hybrid and in the top model Panamera Turbo S E-Hybrid with a system power output of 680 PS.

“With the G2, we managed to carry over the performance-oriented hybrid strategy from the 918 Spyder into the luxury segment,” says Gernot Döllner, Vice President Product Line Panamera from 2011 to 2018, and today responsible for product concept development at Porsche. This strategy was well received by customers: in 2018, 67 percent of all Panamera models delivered in Europe had a hybrid drive.

The consumption and CO2 emission values were determined in accordance with the new Worldwide Harmonized Light Vehicle Test Procedure (WLTP). The NEDC values derived from this should continue to be specified for the time being. These values cannot be compared to the values determined in accordance with the NEDC measuring procedure used up to now.
Communications, Sustainability and Politics
Corporate and Product Communications
Ben Weinberger
Phone: +49 (0) 711 / 911 28724
E-mail: ben.weinberger@porsche.de
Tekst

Infographic: 10 years of the Panamera 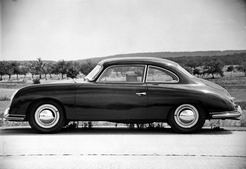 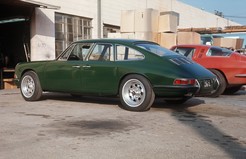 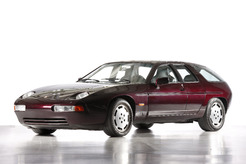 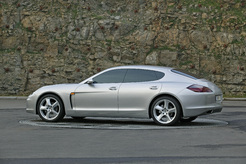 The concept Mirage sets the direction for the first Panamera 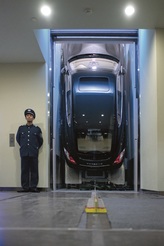 High up in Shanghai: the Panamera (G1) on its way to the world premiere in 2009

Electric pioneer: the Panamera (G1 II) was the first plug-in hybrid in the luxury class 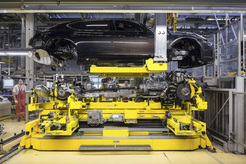 Made in Germany: the Panamera is manufactured entirely in the Porsche plant in Leipzig 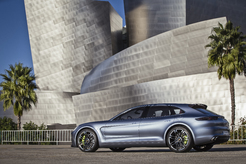 The Concept Sport Turismo was revealed in 2012; series production began in 2017 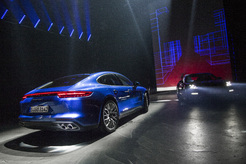 Word premiere in Berlin 2016: the second generation of the Panamera (G2) 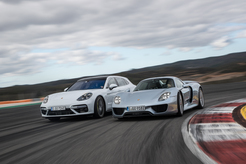 E-Performance: the boost strategy of the current Panamera hybrid models has been adapted from the 918 Spyder 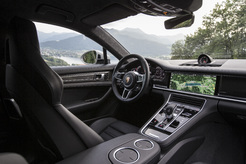 S19_1802: Technology platform: innovations like the Porsche Advanced Cockpit are later transferred into other Porsche models
25.04.2019

Technology platform: innovations like the Porsche Advanced Cockpit are later transferred into other Porsche models